Christopher Griffiths childhood dream was to grow up and become a rock star. Growing up in the cold winters of Michigan, he had a lot of time indoors to fantasize about such things. He didn’t have to wait long though, as he began playing in bands when he was just nine years old. 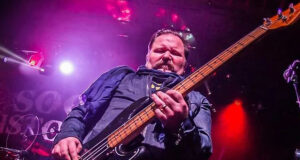 Christopher attended Berklee College of Music in Boston before moving near Nashville (Murfreesboro) at the age of 22, where he has lived for the past 17 years, pursuing a professional music career. “I’ve been a sideman for different bands for years,” he said. “I’m also a producer and songwriter. I think we all are in one aspect or another,” he laughed, “but that’s how I pay the bills.”

Christopher is a multi-instrument musician, playing bass, guitar, keys, synth, harmonica, mandolin and upright bass. “Give me an hour and a bottle of scotch and I’ll learn to play something,” he once joked. He balances his time now between playing bass for Will Hoge, and working on his own material.

His latest single release, “Take On You,” has proceeds earmarked for one of his passion projects, L.A, Animal Rescue. “I was talking to my sister, Cindy Drummond, one night,” he said, “and she was telling stories of her time working with the L.A. Animal Rescue. She’s an actor, but still finds a lot of time to donate and help stray animals. Having lived half my life as a stray animal, I sat down that night and wrote something I thought conveyed that feeling – the moment of adoption.”

The single is part of an upcoming CD project called, “Lime Lake Road,” which is also the title of the next single to be released. It’s a song about where Christopher grew up and the struggles of his dad dealing with cancer.

Christopher’s music slides perfectly under the Americana umbrella with it’s rootsy, country, folksy feel. “Americana is so open-armed, anti-competitive, and it has such a community feel to it,” he said. “We all come together wherever we are, and I think people really dig that. You can just see it on their faces.”

Check out Chris here; www.christophergriffithsmusic.com, and listen to the full interview here.