This week welcomes the release of a fabulous new single from the Asquith Session no.3 with featured vocalists Aly Cook , Jon Abo & George Washingmachine. ARIA award winning producersDavid Nicholas and Graham “Buzz” Bidstrup brought together a session band of legendary Australian musicians at Sydney’s Asquith Studios adding their own unique interpretations to some much loved classic Country, Blues and Americana songs. Asquith Sessions are released through SBD Music, a label partnership between the producers and industry stalwart Sebastian Chase from MGM. 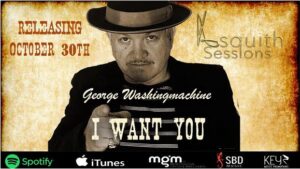 The Tracking Crew with vocalist George Washingmachine, deliver a new interpretation of Bob Dylan’s 1966 classic – “I Want You”. Rootsy and upbeat this is a true one take wonder, featuring stunning instrumentation from ‘Buzz’ Bidstrup on Drums, James Gillard on Bass Guitar, Rick Melick on Keys, John Kaldor on Dobro, and the late Glen Hannah on Electric Guitar.

George Washingmachine is an Australian actor, comedian who plays guitar and string bass. However, it is as a gypsy swing violinist that he is most known for in the jazz world. George recently released “Blues Rinse”, an album he made with members of the Tracking Crew under the production team of Buzz Bidstrup and David Nicholas.

‘I Want you’ is available on all platforms here https://ffm.to/thetrackingcrewiwantyou