Tim White is one of East Tennessee’s most prominent bluegrass musicians and broadcast personalities, and he is celebrating the 25th anniversary of one of his early albums titled, The Possum Tapes, by releasing a new music video for one of the songs on the album titled, Five Pounds of Possum.

Tim wrote the song, Five Pounds of Possum as a humorous tribute to the animal known as a culinary staple in many rural Appalachian households. Since the original recording, countless artists have covered the song. In response to that fact, White said, “Imitation is the greatest form of flattery. You can search the You Tube internet site and see that hundreds of people have either recorded Five Pounds of Possum or performed the song live. I get a smile whenever I’m walking through a fiddler’s convention and hear someone playing that song.” 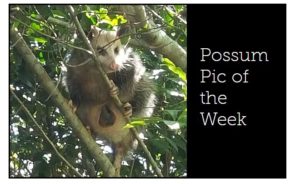 On this newly released video, Tim White is joined by band-mates, Donnie Ollis and Garry Ollis. The group performs the song in a cabin setting with interspersing scenes featuring Seemore Possum, which is a costumer character mascot that entertains audiences at White’s concerts.

Currently, folks know Tim White as the host of the nationally syndicated public television concert series Song of the Mountains and his radio program The Tim White Bluegrass Show; however, in the late 1980s, when he wrote the song, he was just another struggling bluegrass banjo picker.

Here is how White described that period in his life and the facts that lead up to his writing the song, “I used to promote a bluegrass show. Bill Monroe would appear and there was always a guest band. That’s where I met Jim and Jesse McReynolds, who were, at the time, regulars on The Grand Ole Opry. The McReynolds took me under their wing and offered to help me with a project. I woke up one morning and just had this idea to do an album on possums. It just seems like everybody’s amused by possums.”

Brothers, Jim and Jessie McReynolds were co-producers of the album. Jesse McReynolds said, “I grew up hunting possums as a boy in Virginia. Remembering that got me interested in The Possum Tapes album. I had a good time doing Tim’s album. It was the most interesting project that I ever got into because I would never have thought about doing a possum project otherwise.”

White continued, “We released The Possum Tapes album in 1993. While it was first perceived as a novelty album, it since has gained cult status among fans of bluegrass music, thanks in part to the involvement of several prominent artists, including Jimmy Martin, Rory Husky, Jr”. Other well-known musicians on The Possum Tapes include two-time Grammy winner Carl Jackson and Wayne Taylor, who is now a member of the popular bluegrass band Blue Highway, but was working as a coal truck driver at the time The Possum Tapes album was in the works.

This is Tim’s take on how Taylor got involved, “I used to run into Wayne at local festivals,” I knew he had what it took to be a successful musician, but he just needed to get with the right people, so I asked him if he wanted to write a song for the album.”

Taylor ended up writing three songs for the project, each with younger listeners in mind. Taylor related, “I wanted to stay away from anything that had to do with killing or eating the possum, The idea for the song, “Possum Promenade,” came about one day, when I was thinking about those old Warner Brothers©. Looney-Tunes© cartoons. I imagined possums getting together at a barn dance. I still think that song would make a great cartoon.” Taylor’s song, “God Made The Possum,” is an amusing celebration of the possum’s anatomical diversity. Wayne said, “I started thinking about what a possum looks like, and how it seems like God just took parts from different animals and threw them together,”

During his career, Tim White has performed with and interviewed, many acclaimed artists. But he considers The Possum Tapes album one of his most enduring and memorable projects. As he describes it, “It was one of those pinch-me moments, to get to play on this album with some of these legendary pickers. It was a real event in my life.”

If you navigate your computer browser to https://youtu.be/T2dQhvrdW_s.), you can view the new video performance of the song “Five Pounds of Possum” from the album. You can obtain a copy of The Possum Tapes album on the internet at iTunes, Amazon, CD Baby, Spotify and other digital music outlets. For more information about Tim White, visit www.TimWhiteEntertainment.com and www.FatDogRecords.com.