Stepping away from music-industry nuts and bolts this time, I plan to share some of the interesting characters we met on my recent tour in Europe. Each gig brought note-worthy characters as well as good connections for future bookings.

We began in Nancy, France, near where my cousins live, and about 1.5 hours from where my mother was born and raised. This was a small venue that hosts music once a month. It turned out to be very meaningful because not only were all of my cousins there, but a gentleman, unknown to me but from my mother’s hometown, presented me with a printout of my family tree dating back to the 1600s. That was very thoughtful of him and completely unexpected. 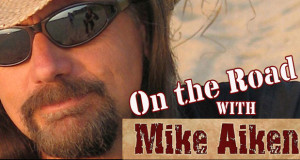 We were also very lucky, in an accidental way. The gentleman doing sound came well prepared with equipment but a little unfamiliar with his gear. We were ready to roll with it but held some reservations that proved unfounded. It turns out that he doesn’t usually do sound but owns the agency that books artists like me. By the end of the night, he said he could definitely book me in at least one festival, get four to six gigs to go with, and introduce me to agents in other countries. Score! This too, was unexpected and will prove fruitful for my future.

Next were gigs in the Netherlands. One is a great venue in the north where we have played before and where the fans are rabid for the music and are like family. Before we left the States I got a Facebook message from a guy who said he was coming but had a 2.5 hour drive to get there. Cool! Thank you, come on out. It turns out he is a truck driver who spends his work-days listening to Spotify, carefully dissecting harmony tracks and guitar parts. He knew all the words and asked good questions about instrumentation. He loves American music and has a telecaster tattooed over his whole forearm set in a scene of the American west, an anniversary present from his wife and children.

Next was a small venue in the south, near the German and Belgium borders. A very unique place decorated for wolves, music and the American west. This particular Sunday afternoon brought a very enthusiastic crowd, each with a very interesting story. In addition to our creative hosts, the Dutch Country sanger, the woman fighting cancer with her adoring husband, the folks who book a festival in Germany, and the folks who have a Dutch Country music magazine, there was a wolf-man and another veiled soundman.

The gentleman doing sound for us was possibly the most attentive soundman we have ever had. He was mindful of what we were after and paid very close attention throughout the performance. We hit it off immediately, talking about guitars and songwriting. During our break, folks in the audience were asking ‘Have you known Richard (soundman) long? Have you worked together before? Do you even know who he is?’ Uh, no, no and no. It turns out he fronts one of the most popular Country bands in Europe, the Music Road Pilots, the same band that backs well-known American artists. AND he is the lead singer and songwriter for a progressive thrash-metal band, Sacrosanct. You would never have guessed any of this as he was so down-to-earth. At the after show hang, we agreed to start Skype co writing. Hats off to you Richard!

And finally, one of those characters who sticks with you for the alternative path they have chosen, who is a reminder to live passionately. Joe is a true wolf man. He has 12-15 wolves at any given time, rescues them, raises, them, studies them, films them and then distills this knowledge to educate us about them. He opens his ‘preserve’, Wolves Unlimited, to the public for education and photo ops. He shared several photos and stories of his wolves, the differences between North American and European, as well as his hospital visits, complete with scars. He expressed how he has to fight bureaucracy to do what he does and has to get creative to afford feeding his pack. He has deals with local farmers to take their dead livestock, saving the farmer disposal fees and time. My favorite though is how he picks up road kill and puts it in his car, or better yet, his wife’s. His passion and devotion are exemplary.

That’s it. These are just a few of the characters we were happy to meet. Remember to keep your eyes and mind open, we all have a lot to learn from each other and there is so much to be gained from being “On The Road”. Just one more chapter in this Wayward Troubadours life. Cheers!