A Travelogue Of Stories 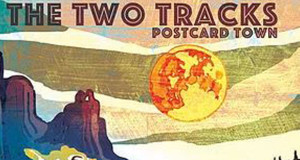 The Two Tracks have been together for several years now Dave told me. Dave got his start in classical music playing the cello. He eventually moved away from classical music for a season of learning to play the guitar and write songs. He eventually migrated into folk/Americana/bluegrass music where a few of his friend encouraged him to get his cello out and jam with them. “I really didn’t think the cello had a place around the campfire but it turns out that it’s very well suited to bluegrass and folk, and even rock and roll,” Dave said. “I usually alternate between emulating fiddle styles to the rhythmic bassy grooves,” he said.

Julie started playing guitar in high school. “We’d sit around the campfire and I’d just try to keep up with them,” she laughed. “I eventually started writing songs, and played solo shows, and duos for years. When I moved to Sheridan (Wyoming) I originally had met a drummer friend, and he and I started The Two Tracks.” When the band finally went into the studio to record their first album, they hired Dave to be part of the sessions. “Since that album came out, Dave joined the band full time.”

Their latest project, Postcard Town, released in May this year, No Depression magazine described it as “creating an instant connection … in truth there’s not a single offering here that doesn’t engage the listener practically from the get go.”

To find out more, visit
www.thetwotracks.com