Al and Amy Love and Music

Al Petteway and Amy White, a.k.a. Al & Amy, have been charming fans for years with their uniquely crafted Celtic-Appalachian influenced music that even marries in the occasional hints of Blues, New Age, and even Jazz.

Before they relocated to the mountains of Western North Carolina, Al and Amy lived in the Washington D.C. area where they were honored with 50 Wammie awards (Washington Area Music Association). Al went on to win a GRAMMY for his contribution to the album “Pink Guitar, The Music of Henry Mancini.” He was also voted one of the Top 50 Guitarists of all time by the readers of Acoustic Guitar Magazine. 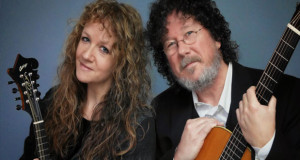 Al and Amy’s start came almost by chance. “We had a mutual friend that I met playing background music for a dance troupe,” Amy said. “There was a concert at the National Geographic Society. where both Al and my friend worked. She invited me to go, and since I worked very close I thought, ‘oh why not?’ Al and I saw each other from across the crowded room, and we both had that look like, ‘there you are. And that was that,” she said gleefully.

After decades of instrumental composition, Amy’s two most recent recordings feature her singing and songwriting, with Al contributing as co-producer and session guitarist. Both of her albums, Home Sweet Home: Songs of Love, Loss, and Belonging, and Didn’t We Waltz reached the top ten on the FolkDJ radio charts nationwide and overseas. Al’s recent solo projects feature his signature finger-style guitar playing with a wide variety of Country Blues, Celtic, Appalachian, and Jazz stylings.

One of Amy’s latest pursuits is, Rescue Me, a Cause for Paws, where she is one of several featured artists. All the tracks were donated by the artists. for the CD scheduled to release on April 30th, National Adopt A Pet Day.

To find out more, visit
www.alandamy.com