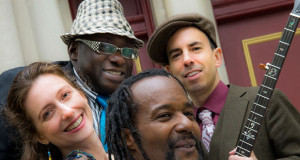 The band is led by multi-instrumentalist Nick Russo who comes from a very musical family. His dad, Rich Russo played in a heavy metal band in the 1960’s called The Scarecrow. “They were a Kiss era band,” he said, “Even sharing the same manager. They were on Columbia records and even notched a couple hits, as well as toured with Sly and the Family Stone. Dad even played for Chuck Berry,” Nick said.

As a kid, Nick played drums on some of his dad’s session in their basement studio. His uncle Mike was also a prolific musician and exposed Nick to a lot of the early rock and blues music of the day. When it came to considering music as a career though, Nick says that an emphasis on education was always important. “I was always brought up with the notion to go to school and get a master’s and go into something more stable,” Nick quipped. “So I was always under the idea I was going into science. But half way through my pursuit I took my first Jazz guitar lessons with Dr. David Belser after being self taught for so many years. I was just so inspired by that.”

It was through some of those early Jazz gigs that he realized you could actually play music for a living. He also began studies in Classical music and says he was immediately drawn to it. “I just knew I had to find a way to make a living at this,” he said. Nick was pre-med at Stony Brook at the time, and decided to do a double major to allow himself the opportunity to pursue this music professionally.

Nick eventually left the Classical roots behind but stayed heavily invested in the Jazz scene, and it was a call from a festival in Brooklyn that led to the incarnation of Banjo Nickaru & Western Scooches.
To find out more, visit
www.banjonickaru.com