Caught In The Middle

New Zealand’s Aly Cook’s most recent CD, Caught In The Middle, saw it’s first single, “Red Dirt Road Trip,” land at number one on both the Country Songs Top 40 Australian Airplay Chart, and the Tasmanian independent Country Airplay Chart – not to shabby for an album project that was completely crowd funded. 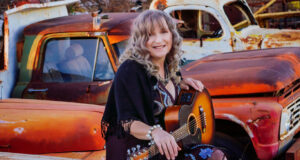 Her passion for performing and songwriting spills over into her desire to help others as well. Not only has Aly helped forge the artist agency, Key 2 Artist Promotions, she was also named twice as a finalist for NEXT New Zealand Woman of the Year, in 2011 and 2016, for her contribution to the Arts.

Aly’s musical exposure started early. Her father was an opera singer with the Guildhall School of Music in London. She started her musical training on classical piano around the age of seven. “I’m glad for that training because it makes me think of things musically from the chord and theory perspective,” she noted.

When she was 19, Aly took a job with a promoter writing tour posters, and eventually booking the tours as well. “I did it because I knew it would teach me about the music industry from the other side,” she recalled. “So my life has been, and is now rotating between being a musician and being a publicist, promoter, and tour coordinator.”

Aly says her music has been influenced by artists like Neil Young and Bonnie Raitt. “I love country, and I love roots and blues too,” she said. “I have eclectic tastes, so I just tend to write where it falls. ‘Red Dirt Road Trip’ was a signature song for me because I’m always traveling across to Australia, and of course there are lots of long, red dirt roads.”

Caught In The Middle was a culmination of Aly’s writing with Graham “Buzz” Bidstrup. (Graham was the drummer for the 80s band, The Angels, known as Angel City in the US). He is well known today in Australia for his production work. “We just started writing together,” Aly said, “and that’s how the album came about; we gradually got enough music to put it together.” The second single, “Not Pretty Enough,” reached the top 10, as well as did the third single, “Cold Wind.”