As a singer/songwriter, Chris Jones has been referred to as, “The wandering musician peddling tunes from town to town, sharing tales old and new.” If you haven’t had the opportunity to hear him live along with his band, The Night Drivers, perhaps you know his as one of the hosts heard on SiriusXM’s Bluegrass Junction. 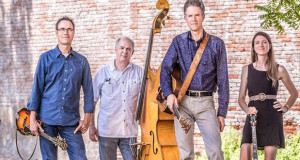 The now Alberta Canada resident is all set to release his latest CD, Made To Move, on the Mountain Home Music Company label. The February 2017 has been called another “distinctive offering from a truly global band of troubadours.”

Chris started playing bluegrass music professionally when he was still in his teens. Although originally from the New York area, it was during the time he spent in Albuquerque New Mexico that he took an interest in bluegrass and country music. He started playing with the community of pickers there before taking his new of music back home. “I was pretty fired up about it,” Chris said, “As you can imagine a 14 or 15 year old boy would be.” His first band, Horse Country, not only gave him an opportunity to be in a band, bit even gave him the spot as lead singer.

Since then, Chris has been the side man in various bands including the Lynn Morris band, Dave Evans, and Special Conscious before forming his own band, The Night Drivers, in the mid-90s. “That’s always a big commitment,” he commented, “But very rewarding and I’ve been very fortunate to be able to do that this long.”

Broadcasting has also been a big part of Chris’s life since his late teens. “When the SiriusXM opportunity came up it was a perfect opportunity for me because with technology what it is today, it was set up so that I could do my shows from the road.”

The latest CD, Made To Order, features 12 tracks of “hardship and hope, songs that inspire and captivate, and yes, even a Bluegrass love song that weaves a tale without ending in someone’s untimely end.”
To find out more, visit
www.chrisjonesgrass.com