Charly Markwart was born and raised in rural Michigan. However, it was a love and a quest for Appalachian music that led her to pursue an education at Bluefield College near the Appalachian Mountains of Southwestern Virginia. 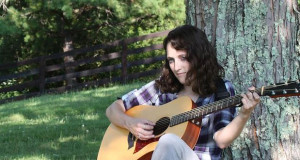 “Growing up I listened to a lot of country music, that was always my favorite,” Charly said. “I was more inclined towards the older music like Patsy Cline and Merle Haggard. But I also liked the singer/songwriter kind of music too.”

Charly said that ever since she was little she always knew she wanted to grow up and be a singer and a songwriter. She never really did anything with it until she went to college. “I knew that was where the roots of acoustic and Americana music were,” she said. “That’s where I actually learned to play music. I went to all these jams in the area at first and started picking it up organically.”

Charly said she made the decision intentionally to go to school at that location because she had studied about the music and knew that was where she would get to experience it first hand. “I went to that area with the hopes of being exposed to it,” she said. “There were a lot of veteran musicians that were very willing o help me along.”

Eventually, learning to play the mandolin, she gained enough experience to start her own band, Diamonds in the Rough, in honor of the Carter Family’s sacred tune, and played throughout the Appalachian region until recently moving back home to be closer to her family.

Charly is close to finishing her first solo project, No Direction Home, and hopes to get out on the road soon to tour with her new music. This will be all original music from her catalog of songs. Although it’s a move away from her original bluegrass sound, “it’s still very rootsy and acoustic sounding,” she said.

UPDATE: “Her debut CD, No Direction Home, is a delightful culmination of her singing and songwriting skills. We dig that mountain flavor coming through on each tune.”

To find out more, visit
www.charlymarkwart.com