French Folk With and a Kiss

Molly’s Kiss is evidence that the influence of American roots music is far reaching. As they define themselves, Molly’s Kiss is “a folk band, lost in the middle of France.”

Formed in 2013, the band consists of guitar, accordion, and two vocals. Nicolas Rozier; Vocals /Guitar, Madeline Besson; Vocals, and Alexandre Tobie; Accordion, all team up to play what they call simple and catchy songs, with Folk melodies, rock energy and generosity.”

As mostly a weekend band, since 2014, they’ve played over 120 shows, not only in France, but traveled to Germany, Italy, Slovenia, Czech Republic, and Hungary as well. 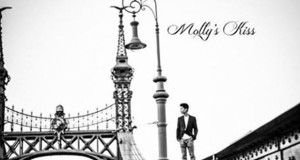 I had the chance to chat with Nicolas, founder, guitarist, and vocalist for the band, about life as a folk band in France. Although Nicolas has been playing the guitar for nearly 15 years, the trio all knew each other before forming the band, which made it easier to connect their passion for American folk music to their desire to perform it together.

“We wanted to create music you could play in your living room,” Nicolas said. “We don’t use computers, or digital effects, or autotune, or anything like that.”

“It’s not so easy to find good musicians in France,” he said. “American folk music is not in vogue here. Folk music cannot be heard on the radio or TV. So if you want to discover new bands you need to be curious, and connected to the internet.”

“In my previous band, I was a rock guitarist. When the band quit I had fallen in love with American folk music, and I became interested in songwriting. We started listening a lot to the Lumineers, and Jack White, and bands like Nickel Creek. We really like Neil Young and Johnny Cash too though. Those all influence us and our music.” he said.

Their latest EP, Sad Stories, is indeed full of energy, and full of promise. We look forward to seeing Molly’s Kiss in the states real soon!

To find out more, visit
www.mollyskiss.com