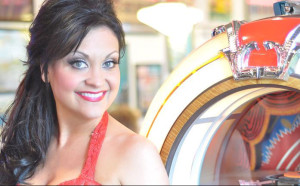 Holly grew up in East Tennessee, just outside of Knoxville in a family that was centered around music. “I feel like Country and Bluegrass run through my veins because it’s been a whole generational thing with my family,” she recalled. Her granddad, Bill Norman played in Roy Acuff’s band when Roy first started in music. “Roy and Bill met as teenagers, and Bill joined Roy’s first band, The Tennessee Mountain Boys,” Holly said.

Roy eventually moved to Nashville and Bill stayed behind to raise a family, missing his opportunity to be part of what became a very influential band in Country music. “I really feel like I’m continuing on the dream that my papaw didn’t get to fulfill,” Holly said. “I feel like I’m carrying on his legacy.”

Holly began singing in her uncle’s regional bluegrass band when she was in high school, before college took her to UT at Knoxville and put music on the back burner. “As soon as I knew I was ready to graduate, I decided to give music another go,” she remembered. An audition at Dollywood landed her a singing gig that lasted several years, and solidified her desire to be a life long singer.

When it came time for Holly’s second album, the focus was an easy one for her. “Elvis; I’ve been a huge fan my whole life. My entire family just adores his music. It’s just always been a big part of my family.”

The CD features a dozen of Elvis’ songs and one original written by Holly. Special guests James Burton, Elvis’s legendary guitarist, and Elvis backing quartet, Terry Blackwood & The Imperials, and many other top notch players are featured musicians on this delightful tribute.
To find out more, vivit
www.hollynorman.com