Craig Bignell and Suzanne Levesque make up the acoustic duo called Over The Moon. Their new CD, Moondancer, recorded recently, is already earning favorable reviews. But it’s just the continuation of years of music history. Today, Craig and Suzanne live on an isolated ranch about an hour and a half southwest of Calgary, Canada. But there’s another side to this musical story. 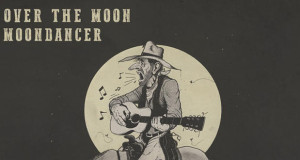 Craig and Suzanne are also musicians for hire, playing drums and bass for other artists who need fill in musicians. Craig’s roots run deeper still. About 12 years ago, he played on some demo recordings for a session in Ontario. “Somehow the songs found their way to John Cowan. He sought me out because he liked how I felt when I was playing the drum parts,” Craig told me. “He called me out of the blue and invited me to come to his house to set in with his band. I had just recently bought a banjo not even knowing what bluegrass music was. So I went to a CD store to see if they had any bluegrass music, and all that they had was a New Grass Revival CD – John Cowan’s old band. I put it on and it blew me away. I love it, and now John’s calling me!”

After a season playing with John and several of his other idols, Craig played a session for a trio called The Traveling Mables, who just happened to feature a bass player named Suzanne Levesque. They eventually met when she, and Craig puts it, “rescued me from a struggling guitar/singing solo performance with her beautiful voice and bass guitar.”

“I fell in love with her instantly,” Craig said. The couple has been singing together ever since and even have had people ask if they were related, as their voices blend together so well that they sound like family. Craig and Suzanne were married not long after, and are now writing the next chapter with their music and their voices.

To find out more, visit
www.overthemoonband.com