Lead vocalist and guitarist Robert Johnson fronts the band, Moses Jones, with a passion and a flair that makes you want to be a part of the band. This new band from Charlotte, NC has been described as “a heapin’ helpin’ of dirty southern soul, with a side of funk, and a lot of jam spread on top.”

This bluesy band is a blend of southern rock, soul, and power percussion, with roots deep in gospel, rhythm & blues, rock, salsa, soul, and country. The flavor appeals to a wide range of audiences and the fellows have been landing some early success and making instant connections between the band and their audiences.

The band actually had it’s beginnings in a local church. Johnson, and fellow band mate Michael Rone (precussion), met while playing together in the church worship band. Not long after, Robert met Rodney Wallin (bass) through common music circles and invited him to join in helping develop some of the songs that he had written. During the early stages, several players passed through the ranks until Moses Jones finally settled on their current line-up when Kennon Knight (drums and vocals), and Dom Val (organ and keys) joined the band. Robert finally found the sound he’d envisioned for the group.

Tons Of Influences
“Everyone in the band had a very different musical journey,” Robert told me. “For instance; Kennon Knight’s journey began with seeing the band KISS in 1977. Joe Williams’s father was a trumpet player and played with such greats as Benny Goodman. Arda Bagcioglu’s father and uncle were both guitar players and helped to bring Rock-N-Roll to his hometown of Ankara, Turkey. My musical journey began listening to my grandmother sing gospel music to an A.M radio on Sunday mornings.” 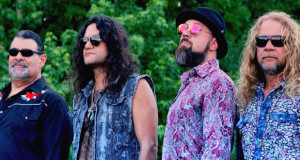 The band is already writing their own songs. Robert writes the songs and music, and he also brings the songs to the guys in the band for them to add their flavor to the mix. Their many influences range from Gospel and Country to 60s psychedelic. “The stories he tells through his songwriting speak of the fabric of life growing up in the Carolinas and have a flare that make you feel a part of the songs themselves,” their press material related. Songs such as “Carolina Days”, “Ole Dirt Road”, and “Won’t Do You No Harm” take you for a ride down memory lane via South I-85.

Biblical Origins
The name Moses Jones has been around longer than the band itself. Some have described Moses Jones music as “Dirty Southern Soul Music.” Robert said he chose the name to show that music is healing. “I chose the name Moses from The Bible because he delivered his people from bondage. Jones, because it represents the and everyday person. Moses is the name of a prophet and Jones is a common name and represents us all. Together the name symbolizes the connection between the music, the band members, and the audience.”

“We’re still not settled fully on the sound and direction of the band. Being a new band, we’re exploring the boundaries of dirty southern soul every day. I wouldn’t really call it settling in to a certain kind of music; However I would call it a current mix of the influences because God only knows how the future style is going to be and that’s the beauty of art.”

Everyone Involved
“One of the highlights of a Moses Jones show is when the band distributes drums and percussion instruments to the audience and allows them to join in on the fun. The band establishes a beat and encourages the audience to play along before taking off on a wild medley ride of songs ranging from “War,” to “Use Me,” to “Rapper’s Delight.” More than a crowd pleaser, the drum circle is inspired by Kennon Knight and his involvement with drumSTRONG, an organization that raises awareness & funds for important cancer initiatives globally.”

Moses Jones heads into the studio this September at a state of the art recording facility in Charlotte NC to record their debut full length album. Eddie Zee, at the Vault, has enlisted the help of longtime friend and recording engineer Mark Williams from Reflections Sound.