Virginia Beach, VA’s Russell Lynch has his music steeped in traditional country music culture, and peppered with notes of Americana and a bit of a rockabilly edge to it This is just like his fans like it, apparently. He has had three top 10 independent country songs in the U.S., including a #1 hit with “Stuck in Between.” His music has received airplay in Europe and Australia as well. 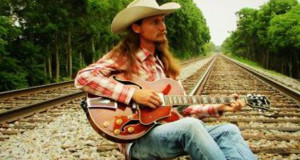 It’s been a little while since Russell recorded his most recent album, Long Lonely Road, but he’s really excited about the new single that was just released this winter, “Outlaw Country’s Coming Back.” “It’s from an upcoming album of the same title that we’re still in the process of recording,” he told me. “We’re really excited to get this one out. Last year we toured mostly in the state of VA, playing at breweries and little festivals, and we’re really looking forward to getting out with this new material.”

Russell has that classic introduction to music that would stir any young boy. “When I was really young, I was down in my grandmother’s basement and I found this old record player and an old Johnny Cash 45 single. It was the song, “He Turned The Water Into Wine.” Every time I went there I just had to go down in that basement and hear that record,” he said. “It’s now a part of my collection – I have that very same record.”

Russell says his new single, “Outlaw Country’s Coming Back,” came to him faster than any song he’s ever written. “When I think about outlaw country I think about going against the grain. I just heard an interview with Marty Stuart where he said the most outlaw thing you can do in Nashville right now is play country music. I’m not trying to knock the new music, but isn’t there still room for ol’ Willie Nelson too? I think so. And that’s my point with this song.”
To find out more, vivit
www.russelllynchmusic.com