Depending on which set you happen to catch of the Jason Lee McKinney Band, you might think they were a different band on another night. Jason says it’s because the band teeters on the edge of several different genres. It’s an alternative country sound at the heart, yet at any given show they could lean to the rock, to the singer/songwriter side, or even to Texas country. 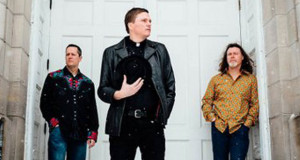 For their fifth release, they decided to do something completely different, as if releasing the previous album as a double vinyl wasn’t. This time, their new release simultaneously came out as three separate EPs. Sacred, Southern, Soul is what some call “sanctified, chicken fried, roots revived, with an American soul.” “It’s an opportunity to showcase each essence of the band at its own merit,” Jason said. “One is more Sacred sounding, one focuses on Southern influences, and the third packs a soulful punch.”

McKinney, was born and raised in Evansville Indiana, “not far from Kentucky, across from a cornfield,” he said. “My dad was a huge music fan, and I grew up around it, going to concerts all the time.” But it was a showing of the movie, Purple Rain, that set in motion the wheels of music for Jason. “At the end, when Prince played that song, I remember thinking then as a little kid, ‘I wanna make people feel like this too.”

In college, Jason ended up signing a major record deal in the Christian music industry becoming label mates and tour buddies with Katie Perry. When that fizzled, he moved to Nashville and took up residence as a staff writer in the music publishing business.

“It just wasn’t for me,” he said. Another swing at music, and then a season of dealing with adult life took him out of the game for a while. “I got board (eventually),” he said. “I ended up hanging out with some buddies, and the only buddies I had were in music. Here we are, five records later.”

To find out more, visit
www.jasonleemckinneyband.com