Tuned In To Real Life

“Jim and Lynna Woolsey have that magical quality of being tuned in to real life, attention to the small stuff, and open heartedness that makes for great songs, and great friends,” said Louisa Branscomb, Founder, Director of Woodsong Farm Songwriter Retreat.

The Southern Indiana pair had been performing together for nearly three decades before they finally decided it was time to make a professional CD with professional musicians. “It was a lifelong dream to produce an album of our original material,” said Jim recently.

Inspiration for that 2014 duet project, The Road That Brings You Home, “came from years of living,” Jim said. “Each song tells a story in our lives.” 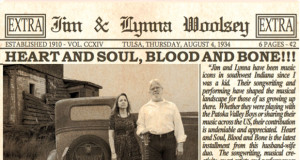 Their most recent project, Heart and Soul, Blood And Bone, has been equally positively received. It appeared recently together with their previous project as top CDs for the year 2016. “I was shocked,” Jim said, “But it was so neat too.”

Jim grew up around music and said, “I can’t remember when I didn’t want to write a song.” Jim credits his Irish immigrant grandfather as being instrumental in introducing him to the heritage of the music. “I grew up on the road and being influenced by the likes of the Stanley Brothers and all the other bluegrass greats. I just developed a desire to play. Grandpa taped two spoons together for me when I was about two,” he laughed.

Jim’s musical career blossomed. One day, when he was giving guitar lessons to a young boy in the neighborhood, the boy’s sister came along with him. “I was blown away,” recalled Jim. “I’m sure I made a fool out of myself. We ended up dating and got married. The rest, as they say, is history.”

While Jim’s musical career continued to blossom, Lynna was always encouraging and helping behind the scenes. About three years ago, all that changed when Jim finally encouraged Lynna to join him front and center.

To find out more, visit
www.jimandlynnawoolsey.com