For two guys who grew up on a dairy farm in New York, just a few miles from the Canadian border, to be called “Bluegrass superstars” by the New York Time is a big deal. Eric Gibson told me recently, “That was a nice feather in our cap to have a publication of that notoriety say something like that. We’ve just been stubborn – and we’ve stuck with it.” And it’s that tenacity that’s also earned them the International Bluegrass Music Association’s Entertainer of the Year; Song of the Year; Songwriter of the Year and Album of the Year, more than once in some cases.

Looking Back
Now in their mid forties, Eric and his brother Leigh are just 11 months apart in age. Eric recalled the day when music entered into their lives. “We came home from school one day and our dad was sitting at the kitchen table with two instruments, and he said one of you is going to learn to play the banjo and the other is going to learn to play the guitar,” he quipped. “Dad didn’t play, but we always had instruments around the house. I think he was a frustrated musician, but he couldn’t really play any of them. So when there was someone around to give us lessons he pretty much decided for us that we were going to give that a try. I don’t think he would have forced us to keep doing it if we didn’t like it, but we found some level of proficiency quite early, and we loved it. We had a very patient teacher, and we really immersed ourselves into the music.” 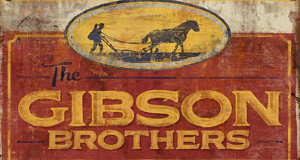 Within a few months Eric and Leigh started playing together in public. “We started taking lessons in the winter and by that summer we were able to play enough songs to go out and perform,” Eric said. They started showing up at fiddle contests and fireman’s field days with their instruments. Their close proximity to the Canadian border paid off. “There were a lot of fiddlers in Québec playing banjo and guitar. We’d show up at these fiddle contests and they’d treat us like gold, even though often times we didn’t even speak the same language but we got along great,” he told me. “We eventually made friends in Montréal who played old classic country and bluegrass music, so we’d go visit them and play music quite often too.”

Eric and Leigh played in church together as well, honing their craft and their harmonies. Through their teen years, they got more into the music and more serious about playing. By the time they were in their late teens, they had put a bluegrass band together, and actually played their first bluegrass festival around 1988. “We finally found musicians who were as crazy about the music as we were,” he laughed.

It Just Happened
The brothers didn’t start out thinking they were going to try to make a living at this. They loved the music but they also understood the value of having an education, so off to college they went. “I became an English teacher,” Eric said, “and Leigh got a couple degrees because he wasn’t sure what he wanted to do. But it seemed like each year the music got more and more serious, and we were booking places further and further away from home to the point that I gave up teaching to focus on music full time. We’ve been full time in the music business since 1998. Of course there’s been a hic-up here and there along the way that caused us to need to find part time work occasionally but it’s been a while since we’ve done anything but play music.”

There’s just something unique about The Gibson Brothers sound. Call it sibling harmony, influence, culture, or a combination of all of the above, there’s just that something special that sets these guys apart. “I think there are a few things in play here,” Leigh told The Boston Globe in 2015. “The first is genetic, the second is tone. The other part is learned. It’s the fact that you grow up in the same household, and you learn to talk with the same people. You pronounce things in the same way and you mispronounce things the same way. That tightens things just a little bit.” Brother acts, he says, often grew up in simple rural settings like their own. “A lot of our entertainment at home came from playing and figuring out songs. Being removed from the rest of the population of bluegrass musicians, there was an individual sound created,” he summarizes. “We’ve just stayed with it all these years, and I’d like to think we’re getting better all the time,” Eric added.

Penning It Out
Songwriting plays a major roll in the success of any band, and Eric and Leigh Gibson have become some of the best in the business. “I love that aspect of music,” Eric said. “I started out as a banjo player first, but as time has gone on I see myself as a songwriter who sings and plays banjo, and guitar. The songwriting is what really fires me up. I love writing songs. I’ve always loved how an idea, or even just a fragment of an idea – a germ of an idea – can become a sentence, and then that sentence can become a verse, and then a chorus, and so on. And then if you’re lucky enough, your band will want to record it. And then, maybe someone will want to actually listen to it – all because you had a germ of an idea for a song.”

Eric says that although he’s been writing songs since he was 15 years old, “Sometimes it will hit me on stage when we’re singing a particular song, ‘gosh, this song is 12 years old and we’re still singing it. People are still asking for it.’ That’s pretty cool.”

Eric says that he and his brother are two different kinds of songwriters, which adds to the diversity of their music. “Leigh is more of a historical songwriter, story songs, and mine are different than that. Leigh wrote a lot for this current album, which I love. For a few years he wasn’t writing that much. Now that his kids are a little older, he’s been able to find more space in his day to write and that’s working for him now too. We both get a kick out of writing and really I’d like us to be seen as singer songwriters who also play music. I’m a fan of the song. I still love to find a song that just floors me, written by somebody else.”

In The Ground
The Gibson Brothers have a new CD out – number 15, “if you count the two cassettes we made when we were in our teens,” Eric laughed.

By many accounts, this could be their best one yet, and this writer would concur. The stew has simmered nicely indeed. “We co-wrote a lot for this new album,” Eric said, “and I love that this time we used all originals. Our whole band got to go into the studio with us on this one, too.”

“I think it shows maturation,” Leigh commented recently. “I started to see and feel the impact of where we’re from—how it carries into our music, its honesty. We didn’t need to turn to anyone else to tell our story for the record.”

“‘Remember Who You Are’ is what my dad said to me right before I went to college,” said Eric, and sure enough, the opening lines of the chorus point straight to his advice:” Some will tell you everything you want to hear, some will make you question all that you hold dear.”

“I don’t have a plan B,” Eric said. “So I really hope this keeps working out for us. The last few years have been strong for us and I really hope it continues. We really love what we do and feel blessed to be able to do it at this level. It feels like we have all the pieces together as a band now, and I think we have a good record that we can play songs off of for a while. Each record is so important. It can really help dictate how your next few years are going to go if you think about it. Hopefully this one has legs. It’s almost a little scary when a record comes out. All artists are insecure in their own way, and we all do think, ‘I hope people like it.’ But I really like it, and I feel as confident about this record as any we’ve made.”