One of AR’s editors was leafing through the pages of the latest AARP Bulletin (Vol 58, No 3, Apr ’17 issue)—yes, he is that old; and on page 38 was a short story about Mr. Michael Kurtz who is recognized as the co-founder of National Record Store Day. After being reminded that the annual National Record Day is coming upon us on April 22, we remembered a story we published in AR’s Issue #56, Apr ’15 about the resurgence of vinyl albums or Records as most folks fondly refer to them.

So, in honor of National Record Store Day we decided to re-run that story to remind you to seek out your local record store and pay it a visit on April 22. You will probably find a party going on complete with live music performances and maybe refreshments in many cases. Nevertheless, paw through the bins of Records and pick out a big black disk of nostalgia to take home with you.

At the 2015 Grammy awards, Prince paid homage to the pioneering musical format with this comment; “Albums … remember those? Albums still matter.” And with that, I invite you to read on. – editor 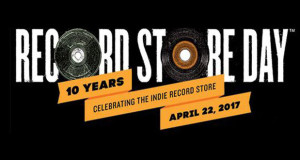 Climb into Mr. Peabody’s way-back machine with me, and travel back to the mid 1960s to downtown Lynchburg VA. There, one chilly, misty Saturday morning, I wandered into a pawn shop/record store and pawed through bins and bins of 78 RPM Long Play (LP) recordings of late 50s rock and roll and rhythm and blues artists. I came upon a copy of Jimmy Reed’s Greatest Hits, which I hugged all the way to the cash register. My rainy Saturday was complete when I returned to my apartment. I dropped Jimmy onto a Gerrard turntable equipped with a Pickering 38T pick-up cartridge that sent an analog audio signal to the preamp of my 20-watt Gromes Little Jewel amplifier. Its 6L6 power output vacuum tubes, drove a custom engineered, acoustically balanced, hand crafted wood speaker cabinet. This cabinet was equipped with both woofer and tweeter loudspeakers connected through an electronic cross-over at just the correct audio frequency. When the stylus of the pick-up cartridge dropped into the vinyl record’s grooves, the speakers came alive with a quiet hiss, then a faint pop and scratch, and then the room filled with sounds of Mr. Reed playing his electric slide guitar and singing stories about Kansas City and a Big Boss Man. Jimmy would blow his mouth harp and the tweeter would screech out the high notes. Mr. Reed would slide his fingers on the guitar strings and I could hear the sound of them moving. He would shift in his chair and the squeak would come alive in my living room. His wife sat behind him in the studio, and I could hear her very softly whisper the next words of the song to him and sometimes even sing a quiet harmony along with his voice.

Returning the way-back machine to the present, I recently listened to a digital recording of the same Jimmy Reed album reproduced via an MP-3 player the size of a candy bar and a set of broad-frequency range earphones that are lighter than a feather. As I listened to this old familiar and beloved R&B artist, I was dismayed. Gone were the chair squeaks, the finger slides, the quiet whisperings, and the sharp mouth-harp notes. The sound was certainly clean and quiet but it was also so different to my ears. I missed the resonance and the faint echo—dare I say it had no depth?

I had assumed, that the richness of the sound, the scratches, pops, and all that drifted to my ears from my long ago hi-fidelity system, and the heavy vinyl records that it played, were all part of an obsolete way to listen to music; however, I recently discovered that many Americana string-music acts now release material using analog recording technology on vinyl media. What this action might represent is hard to discern. Maybe it’s just a nostalgia fad; maybe it is artists experimenting with art; or there might be a real resurgence in interest in vinyl recording occurring. Let us see what some folks have to say to us about this.

Let us first look at the decline and resurgence in vinyl recording in general. A story appearing on www.billboard.com offers some thoughts about vinyl’s return. During the 2000’s in an effort to produce a more convenient way to put recorded music in the hands of consumers, record companies developed and tested a series of products that had new sound providing properties. Nothing tested better than the digital format compact disk (CD). It proved to be more accepted in the market than vinyl records and the retail purchase price was less—thus vinyl’s market share eroded. The recording industry became excited about digital music. The Apple® Corporation was having great success with its iTunes, and sales for its iPod were exploding. This shift in analog to digital format affected business decisions, and financial support rapidly shifted from vinyl records to digital format media. It must be noted, even though vinyl releases slowed to a trickle, vinyl records never disappeared from the market. There have always existed independent recording companies who consistently release titles on vinyl, and there has continually existed a robust underground and somewhat cultish society that supports the vinyl record industry.

The change in consumer spending ultimately resulted in the demise of the big national retailers that sold vinyl records. Vinyl recordings could have eventually become extinct had not something organic happened to prevent that from happening, and this was a grassroots movement known as Record Store Day.

Record Store Day is an international day of celebration observed on the third Saturday of April each year. Its purpose is to celebrate the culture of independently owned record stores. Record Store Day brings together fans, artists, and thousands of independent record stores all around the world. Many famous and not so famous recording artists and other talented folks participate in the day by making special appearances and performances. Often the day is used as a time to issue special vinyl releases to mark the occasion. The first Record Store Day occurred in 2008 and continues to the present with increasing significance. This interest in the local independent retailers of music reproduction has lead to a renewed interest in vinyl recordings; and this interest in vinyl records has, in turn, reignited a passion for music.

We would be amiss if we did not also seek the artist perspective on vinyl recording. To gain this insight, I reached out to Mr. Trent Wagler of the folk/roots Americana string-music band, The Steel Wheels.

Here are Trent’s thoughts, “We started releasing our music on vinyl in 2011 with the Lay Down, Lay Low release. There are a number of reasons we did so. Some of the motivation was the product itself. Vinyl is big and tactile. The listener must participate, with a little skill, to play the music. You put the record on side A or side B and place a needle that turns literal grooves into musical ones. When that side is finished, you must do it again. I think, in the face of an instant digital culture, the vinyl resurgence is there to remind us that we can slow down. Process intersects with product to really make a difference. We can take our time. I can show up to a party with box wine, which might carry more and have really convenient packaging, but most people still enjoy pouring wine out of a glass bottle.”

Trent goes on to say that he thinks that the vinyl experience is also sonically different. Here is how he put it, “I wouldn’t say it’s better or worse, though many like to argue both sides. Digital music allows us to hear more—more frequencies with more clarity. The argument for vinyl says that more is not necessarily better. I like the sound of music on vinyl. I like the way the medium of vinyl has its effect on the music. We started putting out our music on vinyl because we want people to be able to choose the slower pace that vinyl represents, the warmth of the sound, and the process. It really speaks to some people. Others think it’s crazy to go back to vinyl records. That’s okay with me.”

The fact is this: vinyl recordings typically now account for less than 6 percent of the annual music album sales yet the analog vinyl format still remains available for a new generation of music fans. Digital format media will always be the mainstream because of the portability and convenience it provides. The CD led to the MP-3 player, and this little player has led to legal delivery of music on smart telephones. Nevertheless, even with the rush to digital media, discriminating music consumers still enjoy a premium sound; and vinyl recordings provide maybe the best representation of a music performance and a closer connection to the performing artist.

I dismantled my old hi-fidelity system some time ago, and I embrace with gusto the experience of listening to music on my smart telephone—music which I receive from my custom-crafted Pandora® station. Having admitted to that, I still fondly remember those rich full sounds that the vinyl analog records provided for me on those lazy, rainy Saturday afternoons so long ago down in Lynchburg town.