A Year Of Golden Moments

As we look back on an amazing year, we thought it would be fun to highlight some of the venues we performed at in 2016 and share a few road stories with you. We performed at festivals and concerts in 16 different States and the Yukon, met many new friends and made a lot of great memories. We want to thank you all for helping Gold Heart have one of our best years yet!

We brought in 2016 with a performance at the historic Birchmere in Alexandra, Virginia. It was a very special show in many ways, but especially because it was Ben Eldridge’s last official time on stage. It was an honor to perform “Will the Circle Be Unbroken” with him and the Seldom Scene.

We grew up in Arizona, so performing at the Pinal County Bluegrass Festival was great. January is a perfect time to have a festival in the desert and we couldn’t have asked for better weather.

It’s always nice to perform close to home and Frying Pan Farm Park in Virginia is a fun venue. It had snowed earlier that day, but thankfully the roads were clear and we had a nice turnout. It took us longer to load up that night, because somebody (aka Kai) started a snowball fight in the parking lot.

It was so special to be a part of a great evening where women in bluegrass honored Lynn Morris and her music. We performed two of Lynn’s songs and our youngest sister, Kaly, sang one of them.

It was our second time performing at the Lamar County Bluegrass Festival in Mississippi. One morning before our show, the water in our hotel got completely shut off. We had to drive to Walmart and buy several gallons of water so we could wash our hair. It wasn’t really funny at the time, but looking back, we get a g 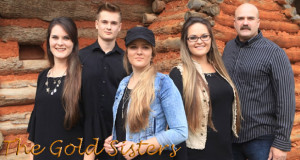 ood laugh over it.

We had a fun time performing at the Wilmington Winter Bluegrass Festival in Delaware. As soon as we finished our last set, we loaded up our vehicle and headed out on our 12 hour drive to Nashville.

To top off a great week in Nashville, we gave a performance at Two Old Hippies, a groovy boutique that also hosts concerts. We were glad to see our friend Dan Eubanks in the audience.

The Parkfield Bluegrass Festival in California was amazing! When we weren’t playing music or hosting workshops, we had an awesome time horseback riding and enjoying the gorgeous sights up Hwy 1.

It’s always a blast to perform at Silver Dollar City’s Bluegrass and BBQ in Missouri. We performed 6 shows in the beautiful Red Gold Hall and of course we fit in as many roller coaster rides as possible. After one of our sets, a couple came up and said they would be at our concert in Arkansas and requested we sing “Mule Skinner Blues” there.

The Kluane Mountain Bluegrass Festival in the Yukon, Canada was incredible! The festival was phenomenal and the scenic views were some of the best we’ve ever seen.

We had been looking forward to the Missouri River Bluegrass Festival in North Dakota for awhile and it did not disappoint! We stayed in a Yurt (look it up) for the very first time and had fun trying new coffee shops with our North Dakota friends.

We added our 28th State when we performed at the Pemi Valley Bluegrass Festival in New Hampshire. Jesse Brock joined us on stage to play mandolin on a song.

The Collins Theater in Arkansas is beautiful. Our new friends from Missouri were there on the front row and Shelby gave a great performance of “Mule Skinner Blues”, as promised.

We were happy to be a part of the Miles City Bluegrass Festival in Eastern Montana once again!

Wow, the Outer Banks Bluegrass Festival in North Carolina was amazing! The stage is set against a beautiful view of the ocean. Our first time to the Outer Banks was spectacular!

We love the Bloomin’ Bluegrass Festival in Dallas, Texas. Everyone does such a great job putting it on and it has one of the best hospitality tents ever. It was our 3rd time performing at this festival and a perfect way to end our 2016 touring season.

Again, thank you all for coming to the festivals and concerts and supporting our music. We have a lot of exciting things happening in 2017!! Check out our website at www.goldheartsisters.com for upcoming shows. God bless you all in this New Year!