Some 10 or 12 years ago, I accompanied my son to a music festival in North Carolina to help him staff a trade booth for a magazine for which he worked at the time. We joined 70,000 music fans for four days of string-music greatness of a type that is now known to many as Americana. That experience led to the creation of the Americana Rhythm Music magazine. That festival is called MerleFest and it is held every April on the campus of Wilks Community Collage in Wilkesboro, NC. We have trekked back down the blue highway many times since then to attend MerleFest and enjoyed every visit; so we decided to introduce you to this festival and the man to which it honors.

Every fourth weekend in April, Wilkes Community College in Wilkesboro, NC transforms from the park-like campus of a local community collage to a setting for one of the largest music festivals in the country. Over four days, nearly a hundred artists perform on over a dozen stages and offers attendees more than 45 hours of continuous music. The performers span the range from nationally known touring acts, up and coming newcomers, and seasoned troubadours known only to serious purists. In addition to the music, there are crafts, vendors, workshops, jam sessions, dancing, and of course food.

Why is this festival held at Wilkes Community Collage (WCC), and where did the name come from? 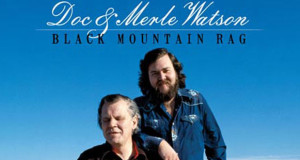 Here is how Ms. Amber Herman, Public Information & Relations Officer, tells it, “The reason MerleFest began is the WCC Gardens. Mr. B Townes was creating a Garden for the Senses for visually and hearing impaired individuals to enjoy. One thing led to another, and Doc Watson became involved. He loved the idea of the garden since he was blind and only requested that the event be named in memory of his son, Merle. For the first few years it was called the Eddy Merle Watson Memorial Festival.” Ultimately, the festival became known as Merlefest, and what follows is a bit of insight and background about the founder and the namesake of the festival.

The legendary folk singer, Doc Watson gathered a few of his close friends in 1988 to create MerleFest as a fundraiser for the Wilks Community Collage to support the campus gardens and in memory of his son and music partner, the late Eddy Merle Watson. Doc wanted MerleFest to be a celebration of what he called traditional plus music (a unique mix of music based on the traditional, roots-oriented sounds of the Appalachian region, including bluegrass and old-time music, and expanded to include Americana, country, blues, rock and many other styles.)

Humble Beginnings
That first festival saw some of the top names in roots music showcase their talents on a flatbed truck to some 4000 fans. This event has evolved 30 years hence into a four day gathering that some years attract close to 100,000 fans from around the world. To the present day, the festival continues to raise awareness and funds for the college, and is a major source of revenue for the collage each year. Some sources place the amount of funds raised to date to be close to $10 million.

To understand this festival phenomenon, one must first understand who Doc Watson and Merle Watson were.

Arthel Lane (Doc) Watson was a folk singer and guitarist whose flat-picking style elevated the acoustic guitar to front-of-the-stage status where it resides today in both bluegrass and country music, Watson’s interpretations of traditional American music profoundly influenced generations of folk and rock guitarists.

Mr. Watson was born in rural, N.C and was blinded in his infancy by an eye infection. Nevertheless, he never allowed this disability to stand in the way of achievement. His musical training, typical for the region, began in early childhood. At the age of 5 or 6 he received his first harmonica as a Christmas gift, and at age 11, his father made him a fretless banjo and later purchased a guitar for him. His family encouraged him to excel in music, and by his youth, he was playing and singing locally with various bands.

In 1960, a folklorist met an old-time folk musician whom he persuaded to sit for a recording session. The musician gathered a band that included Mr. Watson on banjo and guitar. This exposure later led to a concert in Greenwich Village sponsored by the Friends of Old Time Music. That exposure as well as that he received at other folk music appearances had, by 1963, placed Watson upon a solo career path with appearances at colleges and major folk festivals.

Merle To The Rescue
Mr. Watson found touring hard to bear both because he was a naive country boy and had the added obstacle of being sightless. In 1964, his 15 year old son, Eddy Merle Watson, joined him as a rhythm guitarist and driver thus easing most of the burdens of the road from his father’s shoulders.

As the folk movement cooled in the late 1960s, Doc Watson was invited to be a part of the Will the Circle Be Unbroken album that paired the Nitty Gritty Dirt Band with country music stars. The record’s success brought Watson a new audience, and he and Merle toured constantly until Merle’s death in 1985.

Eddy Merle Watson (named after Merle Travis, the country music star) was born in 1949 and was the only son of Doc Watson. Merle started recording and touring with his legendary father at the age of 15, and for the next two decades this duet made 20 albums, won four Grammy Awards, and performed throughout the world together.

Merle learned to play the banjo from his maternal grandfather, and although Merle had been listening to his father play the guitar all his life, he also loved the blues; and one of his first influences was Mississippi John Hurt. In 1973, Merle added slide guitar to his style. Merle Watson was widely recognized as one of the best flat-picking and slide guitarists of his generation. He and his father continued to win critical acclaim until Merle’s death in 1985 at the age of 36—the result of a tragic accident involving a farm tractor roll-over.

Inspired To Continue
Doc Watson returned to the road a week after Merle’s funeral claiming Merle had appeared to him in a dream and urged him to carry on. He continued to tour and garner awards well into the 21st. Century. His death in 2012 was mourned by generations of fans and peers.

At the suggestion of Doc’s wife Rosalee and his daughter Nancy, in 1988 Doc Watson and some friends planned the afore mentioned two-day music festival in Eddy Merle Watson’s honor. Doc Watson remained a major part of the festival until his death in 2012.

MerleFest continues on today under professional management and remains true to the roots put down those many years ago. The proceeds that the festival generates remain a major source of funding for the collage. It is a rite of spring for Americana string music fans from around the world (and a couple of budding journalists who got an inspiration there many years ago for a music magazine).

If you can only attend one music festival this year, this would be the one you should seriously consider attending. The 2017 edition of MerleFest is the 30th. year celebration and will be held April 27-30, 2017 on the campus of Wilks Community Collage in Wilksboro, NC. For complete information, check the WEB site: merlefest.org.