Sunny Side Of The Mountain

The longer I cruise the edges of this genre of Americana string music that folks now call bluegrass, the more I hear folks make reference to Jimmy Martin. I freely admit he is a personality of which I know less about than I should. Even though I remember the golden radio days when there was plenty of Appalachian string music being aired and the mother church in Nashville’s Ryman auditorium aired it all on the Grand Ole Opry—clear channel throughout the eastern US. Those live shows did not include regular appearances by Jimmy Martin since he never received the coveted invitation to become a member of that body.

To educate myself and maybe the few of you dear readers who share my lack of knowledge, I recently did a bit of research into the life and times of Mr. Jimmy Martin who self-described himself as the King of Bluegrass. Less we think that Mr. Martin was a minor player in this genre of music, we need to know this: Jimmy Martin is credited as writer or co-writer of more than 90 songs and instrumentals including many bluegrass standards. If that is not enough to secure his recognition, we also need to know that Martin is considered to be the singer who put the high lonesome in Bill Monroe’s Bluegrass Boys sound thus creating the signature sound for generations of like-minded performers to emulate.

Success Comes Early
James Henry Martin was born on August 10, 1927 in the east Tennessee town of Sneedville. He grew up with very little formal schooling in that hardscrabble farming life that was common in his rural east Tennessee home land. He grew up singing in church and with friends from 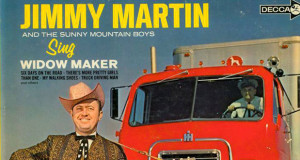 surrounding farms. His mother and stepfather were gospel singers and are considered one of his earliest influences as are also the performers of the traditional country music then being aired on the Grand Ole Opry radio show, which was broadcast by radio station WSM in Nashville, TN. Martin was especially drawn to the music of Opry star Bill Monroe.

When Martin was in his teens, he bought a guitar and learned basic chord playing from a local resident who lived in the hills around Sneedville, and while still a teenager, he played guitar in a local string band and appeared on radio stations around Morristown, TN, to gain experience.

At the age of 22, Jimmy Martin rode a bus to Nashville and found his way to the backstage of the Opry. This was in the winter of 1949, and news reports had announced that Mac Wiseman was leaving Bill Monroe’s group as its guitarist. Martin had visions of applying for this vacant post as guitarist. While Martin was jamming backstage, Monroe’s banjo player, Rudy Lyle, overheard his playing and took Martin to Bill Monroe for an audition.

Jimmy Martin was blessed with a great tenor voice, and after he sang two songs with Monroe, Bill Monroe hired Jimmy Martin instantly as a guitarist but more importantly as a high tenor lead singer. Martin’s high voice mixed nicely with Monroe’s tenor voice and their combined tenor vocals soon became known as the high lonesome sound, which has since become synonymous with traditional bluegrass music.

Influencing The Legend
Jimmy Martin’s influence radically changed Bill Monroe and the Bluegrass Boy’s music from the fast-paced, smooth style of the original 1945 lineup with Flatt and Scruggs. Martin challenged Bill Monroe to raise the pitch on many of his classics and to write new songs that fit this new high lonesome sound. Along with Monroe and Martin, this band’s lineup included Rudy Lyle (banjo) and Charlie Cline (fiddle) and is considered by many to be one of the high points of Bill Monroe’s career. Martin’s vocals and his guitar playing complemented Monroe perfectly, and in the opinion of many, Jimmy Martin was the finest lead singer and guitarist Bill Monroe ever employed. You can hear the Martin high tenor lead in recordings from that era such as Sitting Alone in the Moonlight, Memories of Mother and Da, I’m Blue, I’m Lonesome, Uncle Pen, My Little Georgia Rose and Letter from My Darlin.

It has been said many times, that Bill Monroe had a stubborn, straight-laced, and prickly personality that made him not an easy person to work with. What might not be so widely known is the fact that Jimmy Martin had a high-strung and exuberant personality and was considered unpredictable although he possessed an entertaining stage presence. Martin freely acknowledged problems with alcohol abuse and volatile mood swings. Needless to say these two distinctly different personalities led to clashes. Martin’s first stint with Monroe lasted until 1951. He took another try with Monroe from 1952 through 1953.

Between these stints with Monroe, Jimmy Martin teamed with the Osborne Brothers to form a group named the Sunny Mountain Boys. This musical partnership lasted through 1955 when Martin struck out on his own career path as a solo performer. He commandeered the group’s name for his own use although it had originally been associated with the Osbornes. It is worth knowing that much like the later-day Country Gentlemen group; Martin’s Sunny Mountain Boys hosted a wealth of new musical talent that regularly passed through the group over the years such as: Doyle Lawson, Bill Emerson, and J.D. Crowe. Throughout Martin’s career, the band’s lineup was constantly changing but the quality of the musicians always remained high; and is considered the first bluegrass group to include a female harmony singer.

First Solo Record
In the spring of 1956, Martin signed with Decca Records and made his first solo recordings. Jimmy Martin’s high tenor voice combined with the tight trio singing that he favored, and the use of a snare drum to drive the back-beat of the group’s performance led to a unique musical sound that fans enjoyed hearing.

Through his solo records; his occasional performances on the Grand Ole Opry; and as members of the Louisiana Hayride from 1957 to 1959 and of the Wheeling Jamboree from 1959 to 1962, Martin helped bring the bluegrass genre of music into the mainstream—because he concentrated on music that focused on the vocals and not the instruments.

By the late 1950’s, Jimmy Martin was placing songs in the country top 40 charts and throughout the 1960s scoring with an occasional hit single. He also became a regular performer on the emerging Bluegrass Festival circuit.

Very often when folks discuss the string-music sound associated with the Appalachian Mountains they will soon find themselves discussing the Nitty Gritty Dirt Band’s classic 1971 album, Will the Circle Be Unbroken as well as a Volume II (1989) and a Volume III (2002) albums by the same name. It is very important to know that Jimmy Martin was an integral part of the original album and performed on the later volumes of these epic recorded performances as well, which added to Martin’s musical success.

Life Long Performer
Jimmy Martin recorded for Decca records until the mid-1970s, and then recorded for the Starday/Gusto label until that company went out of business in the 1980s. At that point, Martin formed his own label. He reissued his Decca releases and continued to record and perform at concerts and bluegrass festivals into the 1990s. In 1995, Martin was inducted into the International Bluegrass Music Hall of Honor. Jimmy Martin continued to perform into the early 2000s.

James Henry (Jimmy) Martin passed away May 14, 2005 after a long battle with cancer. He is buried in Spring Hill Cemetery in Nashville, under a tombstone he had designed himself and installed years earlier. The tombstone stands as tall as he did, includes his photo, and is topped by the words Now Sings in Heaven. Plus, it is engraved with virtually every one of Martin’s achievements including his induction into the IBMA Hall of Honor.

By all reports, Jimmy Martin was brash, loud and opinionated. These personality traits as well as Martin’s problems with drinking and his temperamental mood swings kept him from realizing his lifelong dream of joining the Grand Ole Opry as a member. This rejection of Martin by the conservative, well-mannered, and esteemed Opry led to an underlying thread of bitterness that tugged at Martin throughout his career.

Be that as it may be, without Jimmy Martin’s early vocal partnership with Bill Monroe where they mixed and gelled a vocal sound that quickly defined a whole genre of music, plus his later solo musical success, bluegrass music would not be the dynamic international musical art-form that it is today. Furthermore, it is easy to understand why current performers often cite Jimmy Martin as an influence on their performance.