The Voice With A Heart

After our 2007 story, it had been a while since I heard anything new about Mac Wiseman, then the publisher called me suggesting that I do a piece about a Mac Wiseman tribute album that Mountain Fever Records recently released. In gathering background material, I discovered that just since 2014, Mac Wiseman has: recorded and released an indie album of his mother’s favorite songs; did an unreleased project with Merle Haggard; and, in 2014, was elected to the Country Music Association (CMA) hall of fame. Not bad for a guy nine years short of 100.

Music Revival
During 2016, music producers and song writers Peter Cooper and Thomm Jutz spent some time with Mac Wiseman. As they chatted with Mr. Wiseman and listened to him tell stories about his life, their song-writing senses tingled; and they started to see word patterns and phrases take shape and become words on paper. Before long, Wiseman’s life stories formed into stories in song. Cooper, Jutz, and Wiseman worked the words into rhymes; the rhymes into melodies; and the melodies into the songs that told the story. The decision was soon made to put these songs into an album that would serve as a tribute to Wiseman (the man who was dubbed long ago by a Nashville radio person Keith Bilbrey as: The Voice with a Heart. Cooper and Jutz, and Wiseman gathered a group of Wiseman’s friends and admirers together as performers, and released these songs on the album titled, I Sang the Song (Life of the Voice with a Heart) through the services of Mountain Fever Records. Mountain Fever Records sums up their effort in these words, “Producers Cooper and Jutz assembled an all-star band of musicians including mandolin player Sierra Hull, multi-instrumentalist Justin Moses, and bassist Mark Fain. Further featured performers were carefully chosen based not only on artistic mastery, but also reverence for the album’s subject, Mac Wiseman. The result is a collection of perfect performances with special vocal appearances by Mac Wiseman.” 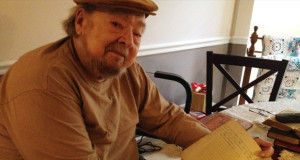 Who Is Mac Wiseman
It is difficult to summarize the life of Malcolm (Mac) B. Wiseman in a few sentences. Born in 1925 among meager surroundings in rural Crimora, VA, Mac Wiseman suffered the crippling effects of polio when he was just six months old. This illness made walking difficult. While he got corrective surgery when he turned 13, the recovery required a cast that ran from his foot to his hip. Mac used the down time during his recovery to learn how to play a cheap guitar. His mother had learned how to read music at a local church seminar, and Mac’s illness inspired her to steer him toward music. She listened to the radio and jotted song lyrics in composition books for his reference. Once fully recovered, life got easier for Wiseman. He formed a band with some boys from high school and played for meals. They even entered a local talent contest at the Harrisonburg, VA radio station where he would eventually land his first job. After high school, Wiseman attended Shenandoah Conservatory of Music, in Dayton, VA; learned the art of radio production; and joined WSVA in Harrisonburg, VA as a doer of all things radio and as a live music entertainer.

Through Mac’s exposure at WSVA, someone recommended him to country singer Molly O’Day, and she induced him to join her band. Wiseman recorded 16 sides with her at Columbia Records. Wiseman later joined Lester Flatt and Earl Scruggs and became one of the charter members of the Foggy Mountain Boys, and appeared on their first recording session. Mac left the Foggy Mountain Boys to go to WSB radio in Atlanta, GA, and during this same era, moved to Bristol, TN to play on the Farm and Fun Time program. This exposure caught Bill Monroe’s ear resulting in Mac receiving an invitation to join Monroe’s Bluegrass Boys. He recorded with Monroe’s band on some of their early classic recordings and played with Monroe on the Grand Ole Opry radio show. Thus Wiseman became an important part of bluegrass music’s historic first generation.

Over 800 Songs
Looking for a solo recording career, Wiseman joined Dot Records as a recording artist and later became a country and western music producer and distributer for the company. It is widely reported that Mac was the man who made Dot Records famous and helped develop the bluegrass genre. Mac also co-founded the Country Music Association (CMA) serving as secretary/treasurer on the original board of directors (he is the only one of the founding members that is still living).

In the course of his musical life, Mac Wiseman has recorded over 800 songs; released more than 70 albums; and became one of the most popular international country artists of all-time. In recent years, record companies in Japan and Germany have re-released much of his material to additional appreciative audiences. He recently said that he has several hundred songs saved back that he wants to record on a small record label of his own just to preserve the songs from being lost.

Mac was inducted into the International Bluegrass Music Association (IBMA) Hall of Fame back in 1993 but was only inducted into the Country Music Association (CMA) Hall of Fame in the fall of 2014. At the time of his induction into the CMA hall of fame, Wiseman told an interviewer that he had given up on the idea of ever being inducted as he thought the selection committee members were going to focus on putting more of the younger artists into the hall. He had made the top five a number of times, but had never made the final cut before.

Tribute In The Making
Mr. Wiseman told me about the project “Thomm, Peter and I had a project a few years ago where we recorded an album of my mother’s favorite songs that she had written in composition books when I was a kid. At that time, we started discussing the possibility of telling the story of my life. So Thomm and Peter came over to my house (Thomm injected that this was over the course of nine Sunday afternoons) and I sat here in my chair and told them of episodes of my life. We then rhymed the stories up and put melodies to them. The rest of the story is that Mountain Fever now has it out.”

I wondered if this was a hard project to put together and Tomm said, “It was the easiest record that Peter and I ever made. Those stories were so compelling that they opened up a universe of rhymes and stories, and because they were true, they were easier to write. So, it was really easy. Once we had the songs, we decided that it would be nice to have other bluegrass artists sing them. We reached out and every one of them was more than happy to be a part of the project. It all fell into place very easily and we are happy with the result.”

The last track on the album features Mac Wiseman and Alison Krauss doing a duet of the song ‘Tis Sweet To Be Remembered. This is the first song that Mac recorded for Dot Records in 1951. Mac had this to say, “Well, my voice has held up well. It might never have been great but it is different. I was happy when I did this duet with Alison because I did it in the same key as I did it on the original recording in 1951. That was very gratifying.” He went on a bit about that particular song, “During my live performances, I had been using this song as a theme song for five or six years before I recorded it. At the time, I was just sweating blood that someone would record it ahead of me. Once I recorded it, several other guys did also but I still stole the thunder on it.”

The first single released off the album was track #7 titled, Going Back to Bristol. It features the IBMA 2015 Male Vocalist of the Year, Shawn Camp, and was released November, 2016. It reached #1 on Bluegrass Today’s top 20 Songs in December. Thomm Jutz told me that since then, several more tracks have charted as well.

As we mentioned above, the last track on the album features Mac Wiseman and Alison Krauss doing a duet of the song ‘Tis Sweet To Be Remembered. Since this is the first song that Mac recorded. It is fitting that it is the final song on an album of songs that serve as a tribute story of his life.

The Mac Wiseman tribute album is available via iTunes, Amazon, and Google Play. For more information about the album please visit www.mountainfever.com.