Although Jason Springs has been performing music for years, he’s excited to be able to release his debut solo project this year titled Blue Collar Bones and Busted Knuckles. It’s a full on band project from this folk/roots, rock artist who hails from Danville, VA.

Jason said he grew up in a musical family. “There was always some sort of music playing throughout the house. Dad would constantly play his old records; Eagles, Steve Miller Band, James Taylor, etc. Both of my parents always sang in church, so needless to say, I’ve been around music my whole life.” 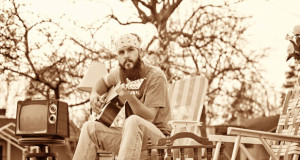 Bounced Around
He was born and raised in Danville, VA, where he spent the first 17 years of his life before moving to Louisiana in 2003. “My father took a job down there, so we packed up and headed south,” he said. “My family only stayed for about a year, but I then headed off to college in Mississippi. I spent the next few years kind of bouncing from school to school and place to place, eventually taking me pretty much all up and down the east coast. I spent a few years in Louisiana, then Myrtle Beach, SC, then Connecticut, Lynchburg, VA, and finally ended up back in my hometown of Danville, VA around 2010. I have a small family, and after kind of running from that and the idea of “home” for most of my early 20’s, I guess I finally started to grow up a bit and realize how important family and your roots are.”

It was after high school that Jason began to take an interest in guitar. He initially learned how to play by just watching friends, trying to learn as much from them as possible. When he got his own guitar, he played it as often as he could. “I started trying to piece together some of my own thoughts into songs,” he said. “Finally, eight or so years later, I released my first album (at the end of 2016).”

Although he’s enjoyed many types of music through out his life, his influences now are in the Americana/Alt-Country/Red Dirt scene. I enjoy quality songwriters,” he said. “Artists who aim to portray a higher quality of art in their work; like Jason Isbell, John Moreland, John Fullbright, American Aquarium, Turnpike Troubadours, etc. I really love the music coming out of Texas and Oklahoma right now.”

On Style
Jason feels like his style is somewhere in the middle of the Americana/Roots movement. “I write everything as simply solo folk songs, and when I perform solo that’s exactly what they are; However, when I’m able to have a full band behind me, like on the album, they become almost Roots Rock and Roll. That was the wildest part of going in to the studio to record my first record. I’d never played these songs as a full band, so to listen to them expand they way that they did once we had all the other pieces in place was pretty spectacular. I love performing solo, but it’s a whole different experience and energy with a full band backing you on stage,” he recalled.
He Writes The Songs
Jason says he writes 100% of his own songs. “I’ve never really done any sorts of co-writing at all. My songwriting process is pretty simple. I’ll have times where I sit down with a theme and chord progression already in mind and just brainstorm as much as possible in one writing session with those together. Other times, I’ll have lines that come to me written in my phone, or a notebook, or on my computer, and they just seem to build over time into more of a central idea of lyrics. Same with the music part of it. I’ll have numerous different chord progressions that I’ve been working on, and finally find the fit between those and whatever lyrics I’m working on at the time. Sometimes it works out perfectly, and others I modify here and there as needed and piece it all together. Little bit of fine tuning here and there, and re-writing, and hopefully I’m able to end up with a product that I’m happy with.”

First CD
Jason released his first album, Blue Collar Bones & Busted Knuckles, in late 2016. The debut release and the stories in it span the last 10 years of his life, and collectively were written over the last five years. “I’ve always resonated with music that brings a sort of nostalgia to the listener,” he said. “It seems that my own album ended up being that same way. I tend to write about where I am in life, so it’s a collection of true stories and my own experiences. I guess you could say it’s a story of growth as an individual in life as I try to come to grips with growing up, being a decent man, recognizing and dealing with my own past screw-ups and flaws, and just hoping to come out of all of it as a better person.”