After a chance meeting between LA singer-songwriter Pi Jacobs and Mountain Fever Records president Mark Hodges in 2016, Pi became the latest artist to release her new CD on Hodges Americana label, Trivanna Records. Her new CD A Little Blue, the seventh from Pi, released in March. Recorded in Floyd, Virginia, Pi teamed up with producer and multi-instrumentalist Aaron Ramsey. The marriage of Ramsey’s deep bluegrass roots and Pi’s “Americana blusy rock thing,” is nothing short of powerful.

Pi Jacobs was born in the Haight-Ashbury district of San Francisco, where she lived all around the city, “including a couple of hippie communes,” she said, until about Jr. High when she moved up to Sonoma County (wine country). 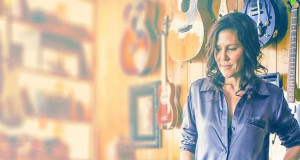 Rocky Start
Pi recounts attending a Hippie Pre-School as a toddler. “We had a choir, and I apparently was being given solo’s (I remember none of this),” she said. “Unfortunately when it came time for our first performance, I had complete stage fright and couldn’t sing a note; but I was 3, so everyone forgave me.”

But that was enough to get her started and she remembers always singing after that; “in school, around the house, parties, everywhere really. I didn’t do any formal studying or lessons though, until I was about 11. I started guitar lessons, and then at some point in high school I fell in love with the Bass and started playing that,” she said.

A pretty troubled kid in high school, Pi eventually dropped out and went to work at the age of 16. “A friend kept badgering me to go to community college, and wouldn’t let up – so I did,” she recalled. “At first I was taking music classes for fun – I thought I was going to get a communications degree.” At some point she realized that she had almost all the courses needed to pursue a major in music, eventually transferring to a State college where she finished that degree.

Experimenting With Style
Pi studied Jazz Bass and Voice in college, but when she got out she played, “in every kind of band you could imagine. “I played Country, Iranian Pop, Vocal Jazz, in a 12 piece Funk Band, Rock bands, Hip Hop bands, Singer- Songwriter bands … anything that would pay me,” she said. While playing with all of these bands she realized that she missed singing lead, and playing the kinds of music she grew up with; Singer-Songwriter, CA country, blues, soul, Southern Rock and Folk. “I had been writing songs for several years, but it wasn’t until after college that I worked up the courage to start putting them, and myself as a vocalist, out there,” she said.

First Real Record
Pi’s first real CD release came in 2001. “I had hooked up with a very talented producer who really kicked my butt (in a good way) by teaching me to write, write, write, and then edit, and that it’s okay to give an audience the emotional payoffs,” she said.

“That record led me to a management deal with a guy in New York City and a record deal in France. I had never left the Bay Area, and so I decided to move to NYC, which was an amazing growth spurt for me as an artist. It was the first place I felt like I had a singer-songwriter community. I met a lot of other artists that are friends to this day, did a ton of DIY touring, and just sort of got better at putting myself out there. Touring will really hone you as an artist (and as a person), but having a community will force you to get better at the areas in which you are weak,” she said.

When asked about her songwriting Pi shared a unique way of initiating the process. “I send myself a lot of texts and voice memos,” she said. “Like, ‘Yo Pi, write about that time when you moved to NYC and got a weird autoimmune disease’ … that sort of thing. One of my secret weapons is to give every song the emotional truth test. Even if it’s a story about someone else, I want it to have a kernel of emotion that comes from my own experience. It’s a sort of gut check for the song.”

A New Approach
Pi recalled the experience that led to her seventh and current CD, A Little Blue. “I had been developing a one-man-band solo show where I play a hand-built percussion box with my feet (Similar to Shakey Graves). In late 2015 I was on tour with the box in the tiny town of Floyd, VA. There was a very attentive table at my gig, and it turned out to be the president of Mountain Fever records, producer Aaron Ramsay, and their radio promoter, Melody. They sat me down after the gig, and said they wanted to sign me to their new Americana label, Travianna. I was completely shocked, but after several meetings, I decided to go for it. I went out to the Blue Ridge Mountains to record with Aaron, knowing that it would be a completely new experience for this California girl. We decided to use the box (no drums), acoustic guitar, dobro, mandolin, and upright bass, so this is my first truly acoustic album, recorded with some of the world’s top Bluegrass musicians. I’m totally in love with the record, and the unique collaboration it became.”