The 30th installment of Merlefest came to a close Sunday afternoon, April 30th, with a crowd pleasing set from one of Country Music’s more popular artists, the Zac Brown Band. It is estimated that well over 80,000 folks attended the celebration over the four days. This festival is the primary fundraiser for the WCC Foundation which funds scholarships and capital projects for Wilkes Community College where the festival is held each year, and considered one of the countries premier Americana festivals. 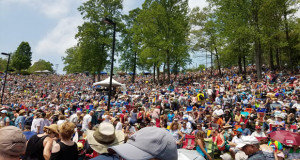 More than 100 acts performed at this year’s festival, nearly all of whom had performed in previous years. Artists like Jerry Douglas, James Taylor, Béla Fleck, Marty Stuart & His Fabulous Superlatives, Del McCoury Band, Leftover Salmon, Sam Bush Band, The Earls of Leicester featuring Jerry Douglas, Peter Rowan, Steep Canyon Rangers, Sarah Jarosz, Jim Lauderdale and many more, including The Avett Brothers, who drew several thousand for a hillside show featuring some of Doc Watson’s classic songs. “We feel Doc’s presence here, even three years after his death, and he’s everywhere in our music,” said Scott Avett. The Avett Brothers invited Doc Watson’s brother, David Watson, to the stage for a special introduction. “I was 15 the first time I came to MerleFest. It doesn’t feel different now. The authenticity seems to stay here,” said Seth Avett.

If the energy from the main stage wasn’t quite upbeat enough for you, there was plenty of that coming from the Dance Tent stage with heart pumping performances from bands like Donna The Buffalo, The Gravy Boys, Front Country, and a rousing performance from Celtic folk-rock favorite, Scythian.

Of course there was always plenty other things to do including the Merlefest Mall vendor area full of crafts and clothing, along with the crafters tent where artisans presented their wares like leather goods, hand made soap, and hand crafted instruments. There was a large variety of food available from local kitchens, plenty of cold liquids to cool you from the heat, and several pickin’ tents where you could join in with your own instrument.

Winners for the 25th Annual Chris Austin Songwriting Contest were also announced. Writers of the final 12 songs (below) were selected from 846 entries and competed on the Austin Stage at on Friday, April 28.

The contest is a unique opportunity for aspiring writers to have their original songs heard and judged by a panel of Nashville music industry professionals. Grammy Award-winning singer/songwriter Jim Lauderdale was again the volunteer contest chairperson. The on-site judges for the final round were lifelong songwriter Mark Brinkman; Berklee College of Music songwriting scholarship recipient Maya de Vitry, who is a member of The Stray Birds; and Joseph Terrell of the band Mipso, and the 2014 winner of the CASC general category. All finalists took part in a songwriting mentoring session with Jim Lauderdale and the on-site judges. The first place winners in each category received $600 cash from MerleFest and performed on the Cabin Stage on Friday night to rave reviews.

“The level of songwriting just gets better and better. It’s almost impossible to judge,” said Brinkman. “Obviously, we will see several of these songwriters in the future.”

“We had an incredible weekend,” Festival Director Ted Hagaman said. “With over 100 artists on 13 stages over the four days, we again feel we succeeded in providing a quality and successful event for all involved. Preliminary numbers show we attracted thousands of fans from all over the world. We appreciate their support. This event could not happen without the work and dedication of our 4,000-plus volunteers and the many great safety and service agencies in Northwestern North Carolina. We’re already looking forward to MerleFest 2018.”