The 14th annual ROMP Festival, promoted by the International Bluegrass Museum, will take place on June 21 – 24, 2017 at Yellow Creek Park in Owensboro, KY, home of the museum. 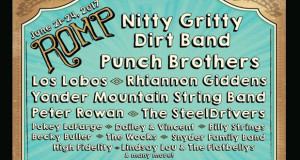 The four-day music festival features camping, and an art festival along with the over 30 top bluegrass, folk and Americana acts. Daviess County’s Yellow Creek Park is a 150-acre facility famous for its nature trails, winding creek and fishing lake, and sweeping tree lines.

Along with the great music and atmosphere, there will be daily artist-led instrument workshops which give musicians the chance to interact and teach fans and players of all ages and skill levels. Additional workshops and forums will feature songwriting, clogging and flat-foot dancing, yoga (all levels), and healthy living through music.

The International Bluegrass Music Museum is a 501c3 non-profit located in Owensboro, Kentucky focused on gathering, preserving, exhibiting and disseminating the artifacts, history, collection, and performance art of the global history of bluegrass music through an educational experience.

Additional acts appearing this year include Yonder Mountain String Band, The SteelDrivers, Peter Rowan, Pokey LaFarge, Dailey & Vincent, Becky Buller, Lindsay Lou & the Flatbellys, and more. More acts will be announced in early 2017. Attendees are encouraged to bring their instruments to jam throughout the weekend, and dance until dawn at the after-parties where nationally-acclaimed acts perform each night on the park’s rustic Pioneer Village cabin stage.

Ticket sales are now open, and available at www.rompfest.com.