Last fall, our publisher spent several days at the Americana Music Association convention in Nashville, TN. While there, he made some great new friends in this growing Americana music business. One of the folks he met was a tour director—yes that’s what we said. Now, I expect that many of us have enjoyed taking bus tours. In fact, just this year, I enjoyed a whirlwind bus tour to New Orleans. Bus tours are not usually exotic—enjoyable, yes, but not so unique. Not so with the tours this director produces. His name is Garry Smith, he’s from Australia, and his tours are the Americana Music Tours and they are centered upon the very subject the name implies; plus they are unique and maybe even just a bit exotic. Let me tell you about an Americana Music Tour.

To give you an idea of what the Americana Music Tours entail, here is a quote that I pulled from the brochure, “Americana Music Tours deliver guests a heady mix of fantastic live music alongside authentic cultural and historical experiences” The company claims that they will show you a life alternating adventure of music and food that extends across five states, 10 cities, and 1200 miles of highways and back roads of the region.

Plenty To Choose From
There are several tour itineraries offered by this company but all of them are centered on a region of the US south that the director refers to as the Americana music triangle. Yes, there really is such a place. When you look at a regional map and place a dot at Nashville, TN, another 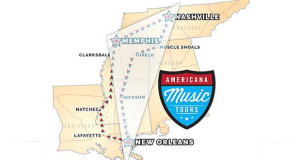 at Memphis, TN, and a third dot at New Orleans, LA then draw lines between these points, you’ve drawn a triangle. Captured within the boundaries of this triangle are the birthplaces of nine different genres of American music that includes: Rock & Roll, Jazz, Blues, Country, Bluegrass, R&B, Southern Gospel, Cajun Zydeco, Soul, and, considering some sub-sets of these, maybe even more.

The tours are designed to concentrate upon these different music genres. They offer a 15 day tour that they call the world’s greatest road trip where you get to hear it all, see it all, and do it all. But enough of the hype; I recently made contact with Mr. Garry Smith and posed a number of questions to him the answers to which you will find interesting.

A Bit Of A Commute
Garry Smith lives in Brisbane Australia and was born and bred in Australia. He has been involved in music all his life. He’s been a session musician; owned a professional recording studio; produced music for five TV series and countless advertising spots as well as produced recording projects for a number of different styles of music. Smith told me, “It was after producing the CD for an Americana artist who lives in Australia that I decided to attend the Americana Music Conference (now called Americana Fest) in 2013 held in the US.”

Garry went on to say that while at the AMC event he met Aubrey Preston. Preston is an entrepreneur heavily involved in Tennessee tourism. Preston introduced Smith to his Americana Music Triangle entity. Smith explained, “I then learned that the three points of the triangle are Nashville, New Orleans and Memphis, and I was amazed to learn that nine different genres of music have come from this area, and that pretty much everything we hear on popular music radio can be traced back to this area.” Smith went on, “I became fascinated by the area and had an epiphany. If I was so excited by what I had just seen and heard, why wouldn’t others? After several trips back and becoming friends with Aubrey, he basically gave me all of his documentation and contacts. I immediately got in the car and drove the triangle, meeting everyone he had put me in touch with. I developed the tour around these contacts and others that I met along the way.”

State Side Bus Service
I asked Mr. Smith if he directed a travel company or was he an individual producer of these tour experiences. Here is how Mr. Smith explained it, “Americana Music Tours is an LLC in the US and a trademarked business here in Australia. I work with a travel agent here in Australia and I have a partner in Nashville who facilitates the tours for me. The Nashville partner is an independent travel company that runs their own tours as well as facilitating tours for companies like mine. They know the area, and along with the Australian agent, they have the resources to do all the bookings, provide the guides and make sure that everything runs smoothly. I have been doing small groups myself for the last few years so with the extra feet on the ground there (in the US) we are now stepping up to bigger groups.”

I asked what type of folks make up these Americana Music Tour groups? Smith told me that his target demographic is music lovers in the 45-70 age range. He expanded, “You don’t need to be a musician—music is such an integral part of life in the US south that the tour is really a cultural experience. We cover other experiences such as food (for example, Tom Hendrix Wall outside Muscle Shoals), and out of the way venues like the Rattlesnake Saloon as well. We try to keep the groups to 12-20 in number, so we can deliver the type of personal experience that the bigger tours can’t do.” As far as where the tourists hail from, Smith says, “We’ve been concentrating on Australia, but we’ve just recently partnered with the Nashville Company and the Australian travel agent, plus our website has been up for a while, so the appeal is now global. Through research we’ve uncovered serious interest in Americana music in Great Britain, Norway (both of those places already have Americana Music Associations sanctioned by the Nashville-based original) and Germany. Of course, blues and jazz are popular in Japan, France, and many other countries, so we see our market as wide open right now.”

Smith has been at this for only a few years having first gone to Nashville in 2013 and developed the tour through 2014 and 2015, and having run a few small group tours since 2015. His Nashville partner has been running tours through parts of the area for a number of years. Smith’s tour is designed to do the whole triangle in 15 days. Smith also has been running a very successful student study tour for the last three years. This tour is organized through a local university. It takes students to a music conference in Los Angles, CA; then to a week of co-writing songs with writing professionals; and finally to a recording session where the students record with Nashville producers and session players some of those songs that they co-wrote.

Fall Is Ideal
As to what time of the year the tours take place, Mr. Smith had this to say, “Ideally we would run tours in the Spring and Fall; however, I have a group here that wants to go in January so they can experience the cold weather that Brisbane doesn’t have! At the moment we’re marketing an October tour that is based around the King Biscuit Blues Festival in Helena, AR. We’re also planning a tour for April 2018 that will take in a weekend at the Juke Joint Festival in Clarksdale, MS.

It seemed to me when I read the itinerary for the various tours that it must be difficult to tailor a particular tour. Smith agreed, “Designing these different tours has been really difficult. I have driven the area so many times and am so passionate about it that I want everyone to see everything all at once. In fact, the 15 day tour was originally going to be an 18 to 21 day tour. I realized that Americans don’t have the length of holidays that Australians have (out here we have 4 weeks a year) so I needed to make the length of the tour achievable by as many people as possible.”

There is no tour overlap as all the tours are independent and based on the make up of the tour group. The standard 15 day tour starts in Nashville. Smith said that they could facilitate highly personalized shorter tours that would hub out of each of the main centers of Nashville, Memphis and New Orleans

In closing our conversation, I asked Mr. Smith to tell to me what he hoped the tourist would take away from the tour experience, and here are two thoughts that he mentioned, “Nashville is not just country music—rather it is a genuine music center. This is an eye-opener—I had no idea of the importance of this area in the history of popular music until I saw it for myself.”

Should you care to learn a bit more about Gerry Smith’s magical, mystical Americana music tours and maybe tag along on one, point your computer’s browser to
www.americanamusictours.com
for the detailed information you need.