Originally founded in 1988, Merlefest was created to honor the memory of the son of the late Doc Watson. Eddy Merle Watson was a renowned guitarist in his own right, and traveled and performed often with Doc. The festival is traditionally held at the end of April every year on the campus of Wilkes Community College in Wilkesboro, NC. (4/23 – 4/26, 2020) 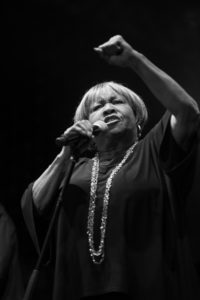 In its 32nd year, Merlefest is a celebration of what Doc referred to as “traditional plus” music. It’s a unique mix of traditional, roots-oriented sounds of the Appalachian region, including old-time, classic country, bluegrass, folk and gospel, and blues, and expanded to include Americana, classic rock, and many other styles. 13 stages host the broad range of solo artists, duos, trios, acoustic bands and full electric band performances over the four day event.

Every year the line-up features more bands than you have time to take in – making the decision extra difficult to pick and choose from the incredible selections. Top tier acts lead the way again this year as Merlefest announces the complete list of 2020 performers.

Willie Nelson & Family, Alison Krauss, John Prine, Melissa Etheridge, lead the way for what promises to be an incredible four days of music. Up an coming Marcus King Band, and rising star Billy Strings bring a fresh youthfulness to the stellar playbill.

Tickets for the festival are on sale now and may be purchased at www.MerleFest.orgor by calling 1-800-343-7857. MerleFest offers a three-tiered pricing structure and encourages fans to take advantage of the extended early bird discount. Early Bird Tier 1 tickets may be purchased until February 16, 2020; Early Bird Tier 2 tickets from February 17 to April 22. The remaining tickets will be sold at the gate during the festival.