Bluegrass music has a new family. That’s right. It’s the Mafia. Blue Mafia, that is. Led by husband and wife Tony and Dara Wray, Blue Mafia was formed in 2011. Tony says, “Basically because my wife wanted to be in a band, too.” 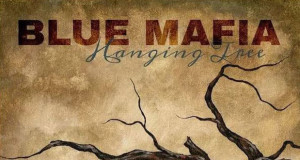 The result for this Indiana band was a highly acclaimed 2013 release, My Cold Heart. That led to a record deal with Pinecastle Records and their next project in 2015, Pray For Rain. Their follow up to that is their most recent record for Pinecastle, Hanging Tree, named after a rendition of the song by the same name on this latest project.

Tony has a Jazz background from his dad, and a country/gospel background from his grandpa. “I heard the banjo one day, and fell in love,” Tony said. “I asked if I could learn to play one of those, and after my dad stopped crying, he said, ‘ah, sure.’ So dad bought me a banjo, and I learned how to play Jazz – on the banjo – of course, because you want to make your parents happy,” Tony quipped.

Tony went on to learn country and bluegrass, of course, and eventually married his wife Dara, who also has a big musical background. “She’s always wanted to be in a band,” Tony said. “She got tired of riding with her dad to different gigs and riding with me to different shows; So I contacted my brother-in-law Kent (fiddle), and a couple other boys, and we formed Blue Mafia.

“We figured we would just play a few gigs here and there, a pizza joint or local club. It was really just something to have fun with. We never really thought it would blossom into this. But what a blessing,” Tony said.

Tony’s dynamic guitar playing along with the three strong vocal harmonies in Dara, Tony and Kent are a highlight of this band. Dara has even started writing songs contributing three originals to the new album.
To find out more, visit
www.bluemafiaband.com