Larry Norfleet and his band, Branded Bluegrass, received nine nominations at the SPBGMA awards ceremony this past February in Nashville, TN, making them one of the top nominees. Their brand of traditional bluegrass is turning heads, and gaining fans all across the bluegrass community.

The Kokomo, Indiana based band leader tells of his humble beginnings learning on a guitar with less than ideal strings. “It was an old Harmony guitar with strings that felt like barbed wire,” he mused. My brother and I used to play along while standing around jam sessions my dad would have at our house in Nancy, Kentucky. That guitar, was one of those little starter guitars that no one cared if it got dropped, you know. Those strings were awful, but if you got through all that pain, you’ve probably been bitten by the bug by then,” he quipped. 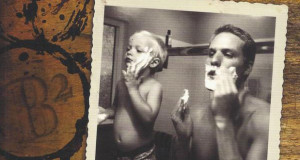 Larry attributes some of his early start to the fact that his mom was employed in the music industry at the time. “We actually got exposed to Jim and Jesse at an early age. My mom’s booth was right beside theirs. We got to play some jam sessions with them at fan fare that year, and I believe that’s probably what rooted in us.”

Around the age of 12 Larry moved to Indiana where the bluegrass bug really sunk in. “With Bean Blossom being so close, we would go attend that often, and you know, once you attend a bluegrass festival, if you’ve got any inkling of music in you, you have to be drawn to it,” he said.

Their current album out is titled, Most Welcome, and has done really well for the band. There are plans already in the works for their next CD. “We’d like to get in the studio this summer or fall,” Larry said. “We’ve been collecting new material, and I’ve been writing some as well. I’ve dabbled all along, but lately I’ve gotten serious, and I really enjoy the process.”

To find out more, visit
www.brandedbluegrass.com