Joseph Henry says his sound sits comfortably between alternative-country and country-western blues. The Americana country/folk singer/songwriter makes his home in New Jersey but at the time we spoke, he was enjoying a stint in Nashville, TN, “taking in the sights and sounds, and playing around as much as I can,” he said. “Its always been a place in the back of my mind that I wanted to visit and experience, and I’m also thinking about making a permanent move here in the future.” 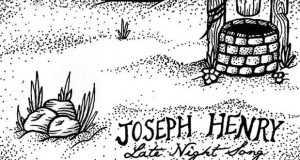 Joseph currently funds his music passion with a job in the restaurant industry, which affords him the free time to be able to have taken this trip. “My boss was really cool about it. He even asked if he could come along,” Joseph laughed.

Prior to pursuing music, he was a long haul truck driver based out of New York City. “I learned a lot about patience driving a truck in New York,” he recalled. “I give a lot of credit to people who do that full time,” he said. “It just wasn’t for me. I can’t imagine doing that for 30 or 40 years.”

“From that experience,” he recalls, “There was girl troubles, and work troubles, and all of that life inspiration that leads up to that creativity. I actually ended up quitting that job and using what money I made from it to go buy a new guitar. That gave me that creative drive and desire to not have to do something the rest of my life that I hated.”

Joseph started writing new songs. “I finally started finding my sound,” he said. “The songs I was starting to create out of these different experiences sort of molded me to the music I’m doing right now.

His current CD is his debut CD, Late Night Song, and was recorded near the end of 2015. Asked why that name for the title … He said, “Because all of these songs were written late at night after everyone is usually in bed.” Well, that makes sense, and you’ll understand it too when you get a chance to listen along to the lyrics.
To find out more, visit
www.josephhenrymusic.com