Singing Success and the Visual Arts

At 11 years old, Benson, North Carolina native Rebekah Todd’s father gave her a black acoustic Washburn guitar and taught her to play it. She’s been filling her life with music ever since. Upon graduating from East Carolina University in 2012, Rebekah has been dedicating her time to writing, touring, and performing her style of melodic soul and alternative folk rock. 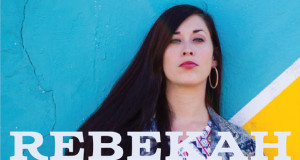 Rebekah said she grew up listening to music. “There was always music playing in the house, usually whatever dad liked, which was a lot of classic rock, so I’m very hip to all of the classics,” she said. “Although my parents weren’t very religious, the thing to do in a small town was go to church. I had some friends invite me to a Pentecostal holiness church, which is very soulful. I immediately enjoyed how expressive they were with their vocals, and it really turned me on to singing,” she recalled. “So that got me started singing at a really young age. And now I think you can hear a little bit of all of that showing up in my music.”

Rebekah actually graduated college with a fine arts degree, and instead of working part time jobs until she found work in the art field, she pursued the singer/songwriter avenue. “Music became my part time job,” she said. Now though, she has her own art studio on the coast in Wilmington, North Carolina pursuing her visual artistic side while touring with her band, The Odyssey, in support of her music.

“Things have been going very well lately,” she told me with regard to her music. “We’ve been playing for full rooms everywhere we go, which is just wonderful to see.” The latest CD for Rebekah and her band is called Crooked Lines, and is already doing well for them. After winning the 2016 On The Rise award at Floyd Fest, they are excited to hit the main stage in July this year as part of that award.
To find out more, visit
www.rebekahtodd.com