Simple Truths In Life and Music

Don Brown has spent the better part of his career doing what he calls, “helping people with people.” He’s written five books, including his latest, Simple Truths in Music and Life. This latest project is a collection of wisdom gathered from Don’s experiences and time spent with Uwe Kruger of the Kruger Brothers.

It was a seemingly chance meeting for the Michigan author/speaker/coach when he was invited by a good friend to attend the Kruger Brothers Music Academy held annually each summer in Wilkesboro, NC. “Six years ago, a friend called to tell me about this academy and asked if I wanted to go, so I said ‘sure.’ It turned out that he became ill and couldn’t join me,” Don told me. “The Academy left such an impression on me that I’ve been back every year since.”

“Being a writer, I like to capture and simplify what I observe. After the second year, I went to Uwe and told him that I wanted to write about the journey I was having with music and the experience with him at the camp,” Don said. 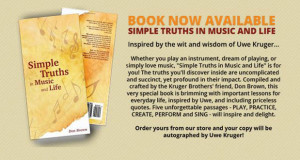 Uwe told him, “I don’t think people would care too much about what I have to say.” Don’s response; “I said I think you’re wrong.” Uwe gave Don his blessing and Don went about the research process. It took him several years after that, pouring through captured audio and video of Uwe’s teachings and interviews. “I even had a transcript of a Swiss television documentary,” he told me.

The result of all of this research is a fabulous collection of 93 “simple truths” divided into four movements; Play, Practice, Create, Perform, and the coda, Sing. You can read it like a story, or you can crack it open somewhere in the middle and treat it like a daily dose of life and musical wisdom – something specific each day.

There’s plenty of nuggets here to help you be a better musician, and even a better person.

“What do you see,” was the foundational truth that started it for Don as Uwe was trying to help him understand the picture he was creating with a Tom O’Brian song he played for him one time, “Late In The Day.” He prompted me to consider what I actually see when I played that song.”

It was that exercise that helped transform Don’s performances and led him to create the book. “He’s such a great teacher. I just wanted to capture some of that wisdom and preserve it, and pass it along.”

Order your copy on Amazon.com or contact Don directly at www.donbrown.org.