Former record store owner, Mike Felten, has parlayed the end of 30 plus years of hawking vinyl into a singer/songwriter career full time, and celebrates his most recent CD release, Diamonds and Televisions. 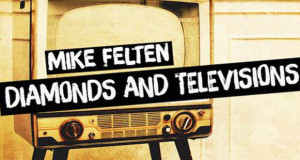 Beginning in 1979, Mike began dabbling in selling records. He eventually opened several Record Emporium stores and developed a pretty strong internet sales following. He also worked record shows from Virginia to California for many of those years.

In 2008, he closed the last store and moved the remaining stock to a warehouse where he continued the online sales for another few years. Fortunately most of the inventory had been sold off when the warehouse burned a few years later. That incident spelled a poetic end to his long relationship with recorded vinyl. In 2010, a documentary called Re-vinylized hit the internet featuring Mike along with several other record store owners in the Chicago area. Unfortunately, it was a little too late to save the business.

In the 60s, Mike recalls taking his first guitar lesson at the Old Town Folk Music School in Chicago. “As a young kid hanging out on that side of Chicago, is was quite a cultural awakening,” Mike told me. “It was an eye opening to say the least. I became a fan of Woody Guthrie and all those other old folk guys, and I began learning all those old songs too.”

He even spent a few years in a rock and roll band. “I was messin’ around with “Hey Joe” before Jimmy Hendrix was,” he quipped. Mike eventually migrated to playing as a solo artist, rubbing elbows with the likes of John Prine like it was just a normal thing to do. “I was always interested in Blues, and helped put on what was probably the first outdoors blues festival in Chicago around 1971,” he said.

In 2003 Mike he recorded his First CD entitled Land Fill, “And I’ve been recording albums ever since,” said the Americana blues artist.
To find out more, visit
www.mikefelten.com